We now have a FFXIV 6.25 release date and a lot more details on what to expect in the next FFXIV update for the acclaimed MMORPG, courtesy of Live Letter 73. Final Fantasy XIV patch 6.25 is set to add even more content to the multiplayer game followed by the massive recent update with the FFXIV 6.2 Buried Memory patch. Players can look forward to new adventures with fan-favorite Inspector Hildibrand, further weapon upgrade missions, more tribal missions, and the exciting non-linear, story-driven Variant and Criterion Dungeons.

Let’s put the biggest news first: FFXIV 6.25 release date is October 18th. As usual, game director Naoki Yoshida and community producer Toshio Murouchi – the latter in a frankly terrifying Loporrit cosplay – take the lead to talk about their takeaways from the release of patch 6.2 and the team’s plans for the next updates. Yoshida jokes that the outfit is too distracting, saying that he tries to give serious answers to the questions Murouchi asks, but “I just can’t when I see you sitting there like that.”

Yoshida says he thinks patch 6.2 “went pretty smoothly,” just adding the need to tweak the health values ​​for the wild raid final boss as a noticeable speed bump. He adds that he was pleased with how the Storm’s Crown test was received, saying that it was very difficult to design, but that the team wanted “a faster, execution-based style of combat after the puzzle-solving focus of recent past battles.”

Yoshida says the team was happy to see the character returning in Pandaemonium, explaining that he was happy to dive deeper into the character the team felt had an “early exit”. He notes that the recent success of Final Fantasy XIV allowed the team a bit more budget, allowing them to include fully voiced lines for the returning character. He also notes that feedback on the wild level’s delayed release has been “very positive” and that the team is “leaning towards delaying the wild release” in the future, with a few minor tweaks.

Moving on to the new FFXIV Island Sanctuary mode, Yoshida laughs about how “Overseas players generally enjoy the content at their own pace, but Japanese players have this tendency to do whatever task they see and try to optimize the their methods of doing so’. He notes player feedback asking for more freeform island customization, saying “We knew this was going to happen, but it’s very difficult to implement.” He adds that the team hopes to allow players to place garden housing items on their islands, but that there is currently no release schedule for when this feature might arrive.

Yoshida also touches on some cosmetic design, saying that the new Titania weapons follow the trend of Ultimate weapons with impressive effects. He notes that player feedback has started to include requests to disable visual effects on weapons and gear, though he says it’s “not that simple” to implement. Likewise, he explains that emotes still can’t be used when holding fashion accessories because they use the same system memory – he says the team is “trying to improve it, but it will take time.”

He also jokes, “I remember when players were happy to be able to paint gear… Now everyone wants us to only allow them to paint certain parts of gear.” Yoshida promises that the new graphics update in FFXIV patch 7.0 will allow the team to continue improving their design work, while Murouchi tells fans, “Keep providing feedback, just please be kind about it.”

As for patch 6.25 itself, Yoshida notes that there isn’t much to add other than the October 18th release date. The team shows two new screenshots as teasers – one of a giant structure in a field with rainbow circles on the grass below, and the other showing two characters in all-black suits and coats with hats that give off a very spy vibe. Yoshida jokes about “A spy family that is very popular lately” in reference to the recent hit manga and anime series Spy X Family. 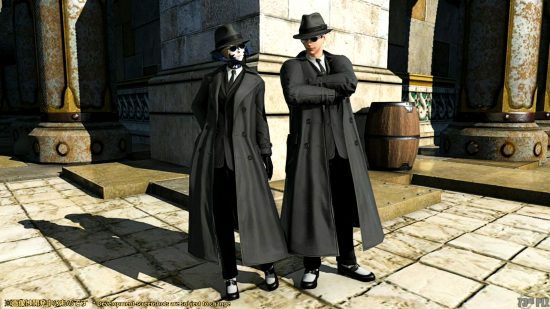 They also add that the the new North American data center is set to arrive on November 1st, with four new worlds to start with, but a possibility that more worlds will be added in 7.0. The housing lottery for these new worlds is set to begin on November 5th. Yoshida says there’s a chance maintenance for the new data center could take 24 hours.

Here’s an in-depth conversation with three of the game’s writers, who dive deep into their history with FFXIV and the story-making process. Square Enix CEO Yosuke Matsuda also joins the stream early to announce that Final Fantasy XIV now has a total of 27 million registered users, and the team expects to reach 28 million soon. Matsuda jokes with Yoshi-P that he would jokingly push Yoshida to reach the 30 million user mark in the past, but now it seems like a reasonable goal. They also note that the team is currently hiring more people to work on future content.

For more details on patch 6.25, you can check out the feature overview in FFXIV Live Letter 71 and the deep dive into Variant and Criterion Dungeons, the Omicron tribal quests, and the new Hildibrand adventures during FFXIV Live Letter 72.

Yoshida also recently announced that the team’s FFXIV 7.0 story planning event is over. Elsewhere in the MMO, a solo player cleared one of the toughest FFXIV challenges in the game’s core classes. Be sure to check out our FFXIV Island Sanctuary guide if you’re exploring Final Fantasy’s quest to join the ranks of the best farming games on PC. If you like story-driven adventures in an online world, we’ve also picked the best single player MMOs for you.

Thanks to Miuna and Iluna Minori on the FFXIV Discord for live translation (link opens a Discord invite).